the Thing in my Sketchbook

I saw a cover of "what if" in the comics shop a while back that I dug well enough to copy in my sketchbook. VERBATIM.
Posted by Ted May at 8:59 PM 1 comment: 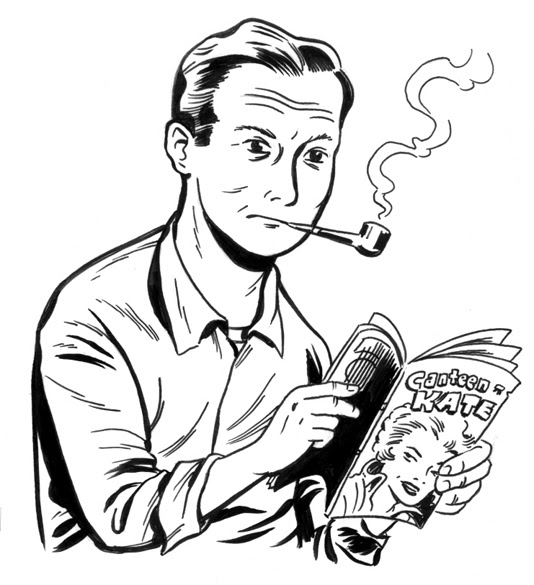 Here's what Comic Art magazine's Todd Hignite looks like. According to my brush. Todd asked me to do an illustration of him for a website bio. So here he is inspecting a near mint copy of Canteen Kate. Todd's a pal and a true gentleman of comics. He just put out an awesome volume called In the Studio. The only book that takes you the reader into the private sanctums of guys like Dan Clowes and Gary Panter. Mr. Panter was in town recently for an exhibition of his work at a local gallery. He also did a book signing with Todd. I told him I really liked his tribute to Kirby that ran in the New Yorker. Apparently Panter visited Kirby in the 70's. Man I would love to have been the proverbial fly-on-the-wall for THAT. He said Kirby's pool was empty of water and had craggy, Kirby-esque dirt formations in it.
Anyway...
(update: I couldn't find it earlier but here's a link to an article about Todd and his mystic ways from the St Louis Post-Dispatch. The print version ran my illo but the online version is no-frills.)
Posted by Ted May at 9:30 PM No comments: 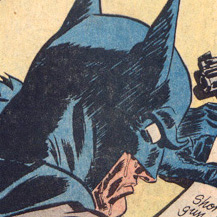 Students of comic art take note of this nice page. A short intro to the career of the incredible Frank Robbins complete with some scans of his gone artwork. The writeup is kinda nerdy but also enjoyable - to wit: "With Robbins there is not long dwelling upon abdominal muscles – something you can certainly find in abundance elsewhere."
I've been meaning to post some favorite Robbins pages to my "library" so this may inspire me to get my ass in gear.
Robbins was the best latter-day Batman artist, period. And by latter day I mean post Sprang, Robinson, etc. Check out the splash page I'm posting (click image above) to see what I mean.
It's a little hard to find Robbins' work since editors often didn't let him do the covers of the books he worked on. This is because his material was so fresh it literally blinded people. Certain comics editors found this blinding quality uncomfortable and relegated his work to be shuttered behind lame Neal Adams-esque covers. But that just makes the longbox crawling that much more intriguing.
Robbins was one of the great adventure strip artists before getting into comics. His stuff on Batman was probably his best comics work. He also did great turns on the Shadow and Capt. America before seemingly getting worn down by the system.
Posted by Ted May at 9:03 PM 5 comments: