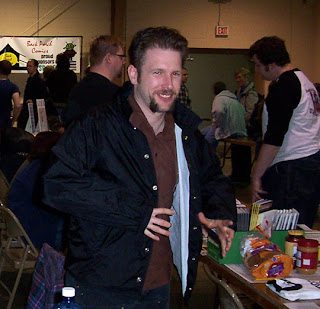 Dylan had been in the hospital quite a bit recently. Lots of people have suggested buying Sparkplug comics to help his family with the medical bills, and I'd like to echo that suggestion here. And I would also add the suggestion to not let time slip away from you. Thinking about Dylan being gone at such a relatively young age just made me think about what a short time we have in life. And it makes me admire the amount he was able to accomplish and the lives he touched. I know my life is much better for having known him. I’m really gonna miss him, that’s for sure.
Posted by Ted May at 9:12 PM

Email ThisBlogThis!Share to TwitterShare to FacebookShare to Pinterest
Labels: Friends